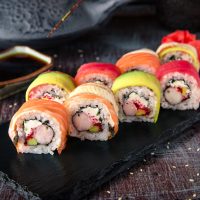 Like Cinderella of old, metal band Toki Toshi toiled in the grit and grime of a touring band for their entire life as an ensemble. And, just like Cinderella, they were transformed for one night only.

Deciding on a late-night sushi binge after stopping at a Flying J at 2 o’clock in the morning, Toki Toshi lost their lead singer and rhythm guitarist for the night to food poisoning.

“We had a gig that night. It paid $50, there was no WAY we were going to miss out on that. It was our gas money to Flagstaff. So, we straight-up Blues Brothersed the joint.”

Referring to the scene in Blues Brothers where the titular band showed up at Bob’s Country Bunker and played a genre of music that was not their own, Toki Toshi performed a jazz set for the confused crowd.

They weren’t expecting it, but Johnny, our bassist is classically trained and our drummer came up in the jazz scene. It just seemed like an obvious work around.

“It’s not what we booked, but people bought drinks so I don’t care,” reported the owner of The Charter House, the venue that was, for one night only, transformed into a high-class jazz hangout.

Gin Blossoms! Shadow will be giving away one pair a day during The 90s Lunch Box. But, if you want to hedge your bets and get your tickets now, the purchase link is HERE.