Pardon me while I sound like an adult for a moment…

Back in my day MTV stood for Music Television.

MTV was pretty much the only channel I watched as I was growing up. My favorite MTV show was Headbanger’s Ball. Like a devout metalhead, I would tune in every Saturday night and try my best to stay up for the entire 3 hours of metal. But, I was about 12 years old and I always fell asleep to the loud lullabies from Cannibal Corpse, Sepultura or Napalm Death.

Although I loved the metal, hairbands were popular at this time. Bands like LA Guns, Warrant, Skid Row, Poison and Slaughter were some of my favorites. I would dance around my room singing “heaven isn’t too far awaaaaayyyy, closer to it every daaaaaayyyy” in time with Jani Lane. I was also a proud card carrying member of the Slaughter Fan Club. Mark Slaughter was (one) of my rock band crushes.

Remember band fan clubs? Where you had to pay a yearly membership fee?  LOL

I found a little gem tucked away in a mystery box way in the back of the closet and I’m going to share it with you. Apparently, I felt the need to write a letter to Headbanger’s Ball. I wish I remembered what I wrote exactly, but judging by the tone of the letter, I wanted to see more Slaughter videos.

And then one day, Riki Rachtman, the host of Headbanger’s Ball, replied.

Thanks for taking the time to write your suggestions.

First of all, as I constantly say on the Ball, I am not the one who picks the videos. Every Saturday night we play a few videos that I would like to see replaced by an old Metallica video or maybe something rare from Nugent or Kiss. On a few occasions the Ball will play a ballad at a time when I would much rather see something heavy like Biohazard or Ministry. Once again, I do not pick the videos. I take letters like yours and turn them over to the people in charge of picking the videos.

Remember that rock and roll comes in many different styles. It’s hard to please everybody all the time. We get as many requests for Slayer as we do Slaughter. You know what they say about pleasing some of the people, some of the time.

On the other hand keep your ears open. You just might find yourself digging something you didn’t think you would.

Thanks again for your letter!

Keep one foot in the gutter,

I am very happy that I still have this letter. As a DJ for Q, I find its message still relevant. Often people will ask me why we play so much Nirvana or Metallica or Green Day. Well dear listener, I do not pick the songs. But I will gladly take your suggestion and turn it over to the people in charge of picking the songs.  🙂 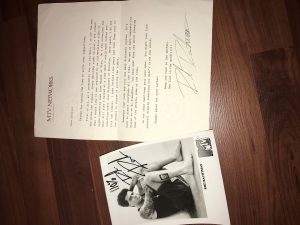