We at Midwest Family Broadcasting are lucky to have some cats from the nearby neighborhood come by and visit. My friends here at the station have named this little black & white kitty Boots, but I call her Bootsie Collins.

Before I go any further, it has been established that I am a crazy cat lady. So it shouldn’t be much of a shock for you when I say that sometimes I’ll make up stories about Boots just for fun. One such story is that she is a huge fan of rock music. I mean, why else would she be hanging around a radio station?

I like to imagine that she’s a rebellious teenager who sneaks out of the house to go listen to records that her family doesn’t want her to listen to because they think that rock music is evil. Or maybe she’s a rock star and had a 6 album deal with Purropolis Records where she has 1 silver, 1 gold and 2 platinum albums. But unfortunately she hasn’t been able to produce any more hits and the label dropped her, so she returned home to collect herself and write more music. And in her downtime from writing new material, she stops by the station for a visit and slips us her new demo. 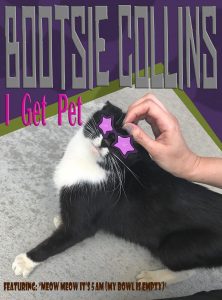