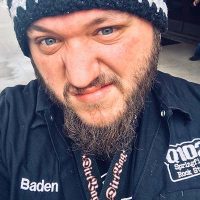 just another day of the week that isn’t Friday. Theres nothing usually too interesting about Thursdays, except that I have to be a work a little earlier for meetings(blah, blah, blah)

I had no clue that this Thursday would shape out to be a cool mini adventure along the side of highway 65!

So as I was driving the Q-truck to work this morning, I noticed that the last person to look under the hood hadn’t closed it all the way, and that the hood looked like it was going to fly up from the wind.

I really didn’t feel like having anymore car drama on my name ( I have shit luck, so people blame me for everything here! lol) so I pulled over on the side of the highway between the James River and Battlefield Exits.

Now, something you have to understand is that our car looks cool, but its currently pretty janky as far as functionality goes.

So when I used my manly strength to shut the hood properly, the impact triggered the security alert on the car and locked all the doors… along with the keys in the ignition, my phone, vape, backpack.. everything! lol.

there I am.. on the side of the highway, car running and no way to call for help.

After awhile of trying to flag some one down to use their phone, I decided to not rely on the kindness of humans, because lets face it.. I’m not a hot chick, a mom, a model, or that attractive at all, so no one is going to stop lol! I began the walk to the battlefield exit to find a business that would let me use their phone, and got lucky when a friend pulled over and let me use her phone(thanks Kayla!!).

I finally got ahold of shadow, and she informed me that people had been calling in, saying that the truck was broken down… thats cool I guess? lol

shadow said that they were sending people out to pop the lock, so I was just going to hang around and wait for my rescuers.

This is where things start to get interesting! (I know right?? lol)

on my way back to the Q-truck, Some one for what ever reason pelted me in the head with a pack of cigarettes containing 5 smokes.. Now,wether or not they meant to pelt me in the head or not, I’m not sure.. but they didn’t even throw me a Lighter! haha I thought this was funny.. because thats all a man needs is a few smokes and a dream right?

After I get back to the truck some one threw a “to go” coffee cup my way.. and as I start to raise my fist to flip the assholes off, I noticed that the cup they threw contained 2 dollar bills in it..? Im not sure I understand what was going through that persons mind.. but I must look homeless or something.. LOL

so at this point, Ive acquired 5 smokes and 2 dollars.. there was a time in my life when Id call that striking gold! So I was actually pretty excited about it.

Now sitting down next to the truck I found my self really looking at my surroundings.. and my mid began to tick..

What you may not know about me is that I was a Boy Scout and was raised knowing survival tactics and have been trained to live in the outdoors and be resourceful.

So I decided to see what I could remember and accomplish in the time before I was rescued, so I stood up and got to work!

Now.. step one to “surviving” is usually always building a fire.. but today I decided to start with the shelter 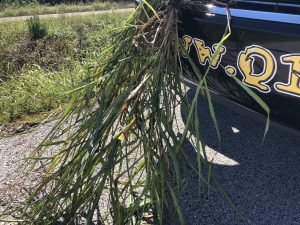 Now I know you are thinking.. this looks goofy as hell Baden.. thats not a shelter at all!

heres what I was doing.

when building a shelter you have to think of the time of year and what you have to work with.

I decided that I only needed rain protection, also I was pretending that the car was a boulder or tree.. lol

I found a stretchy laniard for of material and using that and some stronger long weeds, I started weaving the bases together creating a fan.. obviously I didn’t finish, but from there, I would have tripled the width of the fan, cross weaved  leaves for insulation and used the coffee cup that was thrown at me to catch rain or dew run off from the shelter!

thinking about water and calories.. I decided to search for something I could use to get some nutrition in my body.. and I found the perfect roots to make tea! 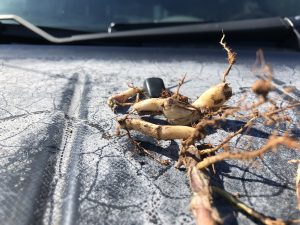 The Root of most plants provide SOOOO many nutrients, especially when boiled.

“But how are you gonna boil your water Baden?? you need fire!”

since I know that creating any sort of real fire on the side the road could land me in hand cuffs.. I decided that I was just going to make a tiny one really fast and put it out… 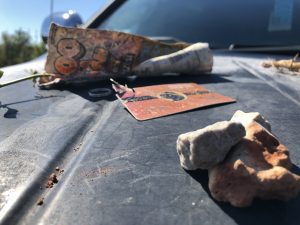 I just happen to come crossed two rocks that spark when they strike each other and a losing lottery ticket along the side of the road! So using some of a cig filter and the rocks.. I was able to create a tiny fire on the lottery ticket.. just enough to light my cigarette lol! In a real situation, I would have built that fire and kept it sustained for warmth and cooking.

Finally, I felt I had accomplished a ton and decided to make a gift for my would be rescuers! 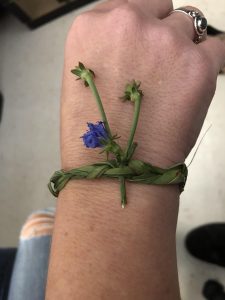 The toe truck finally arrived, and after he popped the lock, I was able to get my phone out of the car and take picks of all the stuff I used in my adventure!

It was quite the crazy morning, but honestly.. not having my phone, not having anything but time, was very cool!

its amazing what we can do when our head is up!

in conclusion… if shit hits the fan or I am forced into a survival situation.. Ill be just fine! lol