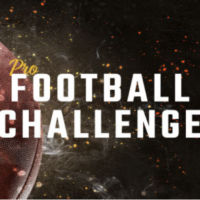 Football season is here and if you think you can select all of the correct winners for the entire season, you will win $50,000!

NO PURCHASE NECESSARY. A PURCHASE WILL NOT IMPROVE YOUR CHANCES OF WINNING. Contest is subject to all applicable federal, state and local laws. This Game May Not Be Used To Conduct, Advertise Or Promote Any Form Of Gambling.

1. Promotional Period: The Game Period begins at kickoff of the first 2021 regular season pro football game scheduled to take place on Thursday, September 9th, 2021  and ends at the completion of the season on Sunday, January 9th, 2022. Exact dates and times are subject to change.

2. The Pro Football Challenge may be conducted under various names by participating stations and entities.

3. Entry Method: To enter, fill in the entry form by selecting the outcome of each game. Each correct pick will be worth 1 point. The player that earns the most points each week will be the weekly winner. The player that earns the most points during the season will be the season winner.  Any incorrect entries will receive 0 points. The  maximum point total for correctly determining the winning team in every game played during the designated  season is 272. The maximum point total for each week is 16. In case of a tie refer to the tiebreaker rules below.

We’re getting close to that time of year again! With the high use of our waterways expected this summer, what better close out to the season than to participate in our annual shoreline cleanup events? […]